We are excited to announce that Laiken Olive, whose pronouns are they/them, is the 21-year-old Artist from South Louisiana who has become the first recipient of the ‘Venom Snake’ bionic arm.

“I always get asked to do Metal Gear Solid cosplays on TikTok” says Laiken, who has amassed 26,000 followers with well over 1 million views.

In the popular video game, Venom Snake loses his arm in an explosion and wears an iconic red and black bionic arm complete with detachable missile functionality and gadgets to stun enemies.

In Metal Gear Solid, the main character wakes up from being in a coma for nine years, and I’ve been waiting a decade to have a prosthetic that is functional and intuitive to my needs.

Whilst the Hero Arm isn’t equipped with weapons, it is custom built and uses myoelectric sensors to detect underlying muscular contractions which are then amplified and converted into intuitive bionic hand movements.

When talking about the game, Laiken can see synergies with personal life experiences, “in Metal Gear Solid, the main character wakes up from being in a coma for nine years, and I’ve been waiting a decade to have a prosthetic that is functional and intuitive to my needs.”

History with other prostheses

“The first time my insurance claim was denied for a bionic arm, I was offered an arm with a heavy body harness most commonly known to be worn by military men. It was so heavy and put a strain on the whole body which seemed so counter-intuitive.”

From a young age, Laiken was ostracized and bullied for being different. Having to attend school wearing a hook would often be the cause for tears.

“Growing up, the only reason I would wear my prosthetic was to hide my difference.” Laiken says a lot more needs to be done to break barriers the limb difference community face daily – starting with access to prosthetic limbs.

Going through the insurance appeal process was an “emotional roller-coaster,” says Laiken. After a strenuous year of appeals Laiken had their Hero Arm fitted.

This bionic arm is now available for amputees in clinics across the USA.

Laiken says they chose the Hero Arm to help enhance their difference “I am non-binary because I never felt like I fit in what is set-out as a societal norm, so I really want to use these Metal Gear Solid covers to challenge not only the stigmas that surround limb difference, but put my spin on gender roles within the game.”

Talking about the synergies of the game and tech Takayuki Kubo, President of KONAMI DIGITAL ENTERTAINMENT, Inc., said: “We’re incredibly excited to collaborate with Open Bionics, who are at the cutting edge of robotics. We’re thrilled to see the iconic Metal Gear Solid aesthetic of Venom Snake and his bionic arm burst out of the screen and come to life, in a dynamic fusion of technology and design that is changing the lives of upper limb amputees all over the world.”

Samantha Payne, COO and Co-founder of Open Bionics, said: “Venom Snake’s bionic arm is one of the most requested cover designs for the Hero Arm of all time, so we’re incredibly grateful to KONAMI for working with us to turn fiction into reality. We love seeing how Laiken uses their new bionic arm as an empowering tool.” 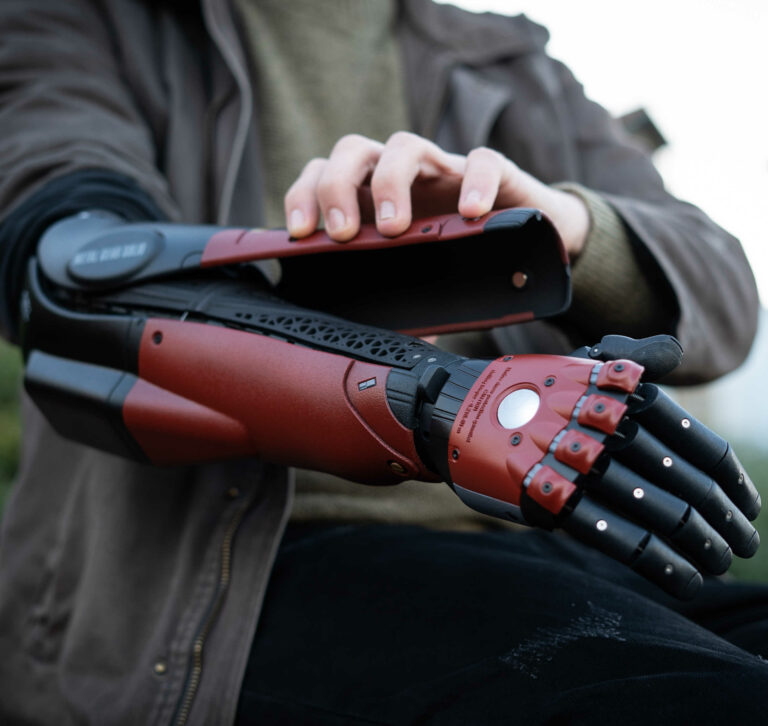