This week Joanna Allen, the CEO of graze, joined us to discuss life as a mother of two children, with her youngest born with a congenital limb difference. In the interview, Samantha Payne, MBE, CEO at Open Bionics, asks Joanna about the advice she wished she had when she found out her son would be born with a limb difference, the family’s experience of trying child prosthetics and how she encourages children to embrace curiosity around limb difference.

Nearly 8 years ago, Joanna was at her 20 week scan feeling nervous and excited. This was her second pregnancy and she noticed that her clinician was taking a little longer to confirm that everything was going ok. After calling in a supervisor for an extra review, her clinician stated ‘The problem we’ve seen is…’.

Samantha: I can’t imagine how many things must have been running through your mind at that moment?

Joanna: Yes, when we were told there was a problem, everything after was a blur and the information we were receiving wasn’t straight forward. Our priority was to figure out whether our baby James’ arm would only be affected or if there were other complications. After a round of further tests, we were relieved to hear it was just that.

S: You credit the US healthcare system for referring you to limb difference specialists in Atlanta when you were still pregnant. Tell us what that journey was like.

J: I had these natural worries: Would James grow up to live a great life? Would he manage? Would he adapt? The specialists gave me a lot of confidence and helped so much with the myth-busting. James can perform 99/100 tasks with ease. In some areas, he is quicker to learn how to do things because he has learned to adapt quickly – he was the first in his class to be able to zip up his own coat.

Every parent worries about their child. Limb different or not, this is just a natural extension of that.

S: After James was born, the family moved back to the UK, was the medical support different to what you were used to in the US?

J: James was one when we moved to the UK. The medical support we had here was very different to the US.

Our experience of our local GP in the UK was disappointing and they could not tell us what support was available for James. Did he need developmental support? Should we worry about his spine and over-reaching on one side? Do we need Occupational Therapy for James?  Do we need to start to think about child prosthetics? We didn’t get any information so we tried a private consultant who unfortunately gave us the same treatment. They were very dismissive and unbelievably didn’t understand why we had brought James to come see them.

S: That’s definitely some of the feedback we’ve had from individuals who come to us looking for alternative prostheses options. Recently we fitted a man who had an NHS prescribed prosthesis that he didn’t like and had gone 16 years without wearing it because he didn’t think there was anything else available.

I think as a parent, if you don’t show you’re afraid of talking about limb differences, your child will pick up on that really quickly.

J: After some researching, I found the Reach Charity. They gave us a back catalogue of their magazines for people with limb differences which was such an amazing resource. They also provided the contact of our local NHS prosthetics team – that team got really creative with making tools that enabled James to perform certain activities. James is also part of the Mitt community which has been fantastic.  He hasn’t yet found a device that he wants to wear daily, but he will wear a tool to get something specific done that he finds challenging.

S: That’s great to hear. We love working with children who are interested in the Hero Arm, they love the challenge! It’s like a shiny new toy that they want to be experts at using. We constantly get photos and clips from parents showing us new things their children have learned with their Hero Arms.

How does James perceive his limb difference?

J: James is very confident and I hope some of that comes from how we have been around him as parents. We wanted James to know that he should feel confident in himself and who he is. I think as a parent, if you don’t show you’re afraid of talking about limb differences, your child will pick up on that really quickly. I think the best approach is to embrace the curiosity others have and when the questions get boring James will let people know by changing the subject.

S: Does he often get questions about his limb difference?

J: Yes, he’s happy to answer questions from friends and new peers but he gets over the conversation when he wants to. Whenever I’m asked questions, I just explain the truth. Most of the time the questions are simple and they stop as soon as I say ‘his limb difference doesn’t bother him, that’s just how he was born.’ When children ask questions about limb differences they’re being innocent and curious and they’re trying to understand something new and different. I would always rather see a parent encourage their child to ask questions than see parents shush their kids.

Raising a child with a limb difference is no different to raising any other child. It’s as important for my 9 year old Daisy to believe in herself and what makes her unique as it is for James.

Everyone feels that curiosity, when James was at the child prosthetics clinic, there was a little girl without any legs, so of course he had questions. I think it’s important to acknowledge the difference and be patient and understanding.

S: What do you think is the best way to raise awareness about limb differences?

J: When James does meet new cohorts of kids, like in a new year group at school or a club, I’ll always have a conversation with the professionals in charge before he joins, so that they’re prepared to answer questions. I also found it super helpful to buy the book Different is Awesome to take into school. It’s a great storytime book and it doesn’t focus the conversation on James or his limb difference. It’s a really subtle way of encouraging everyone to think of their differences as their unique superpower.

S: What advice would you give parents who are finding out they will be expecting a child with a limb difference?

J: Raising a child with a limb difference is no different to raising any other child. It’s as important for my 9 year old Daisy to believe in herself and what makes her unique as it is for James. All our children are unique, with different strengths, interests, and characters. They’re all on their own journeys. You want to celebrate your children for what makes them special.

There’s so much support available for parents of children with limb differences. There are so many role models on TV and instagram now, you’re not alone and they’re not alone. There’s a wealth of practical advice and peer to peer support on Facebook groups. Join Reach! It’s a wonderful community that we really value being a part of.

If you are interested to find out more about child prosthetics or would like to speak with a member of our team about booking an appointment to try the Hero Arm, get in touch here. 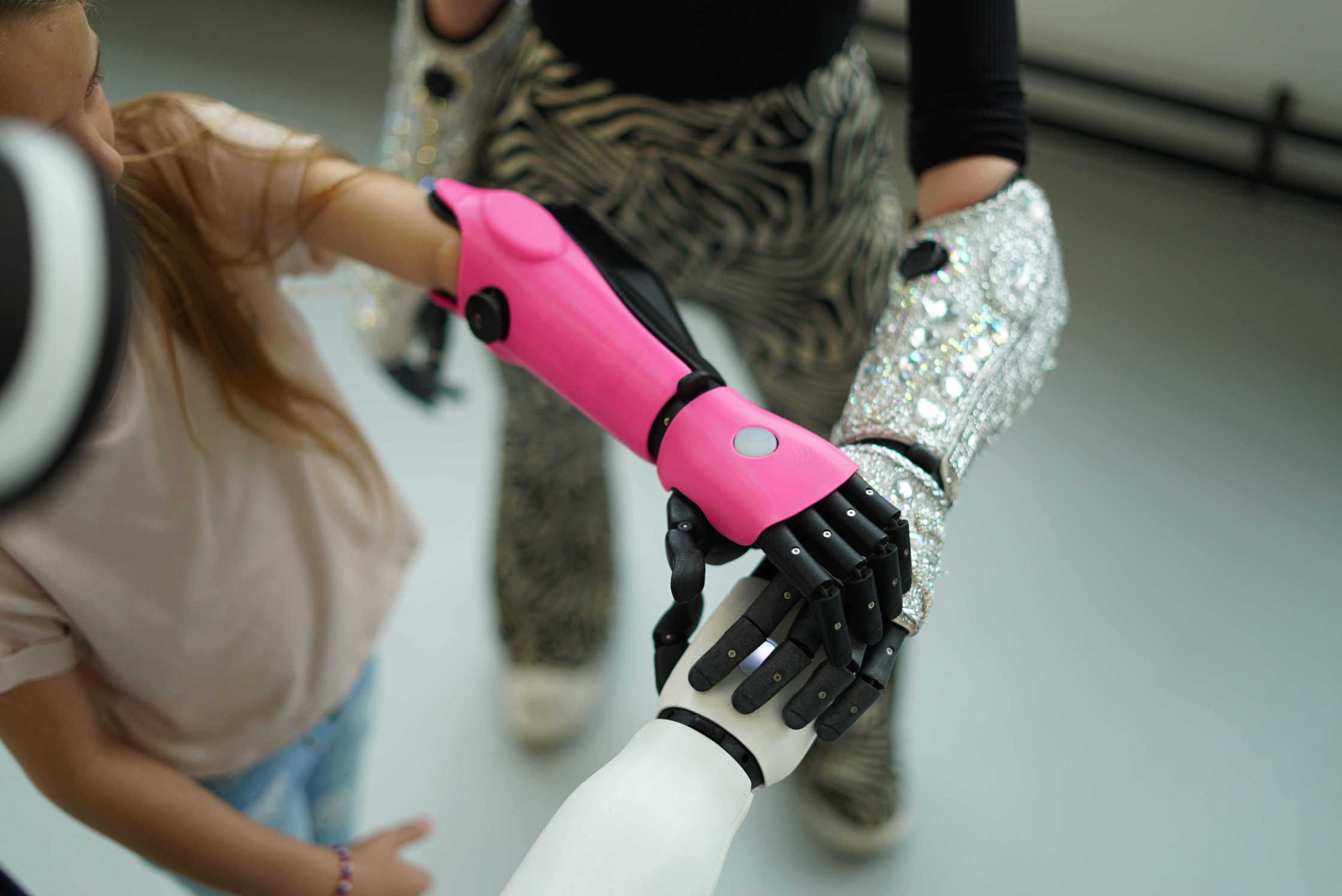 Our Hero Arm is suitable for children from eight years old with below-elbow limb differences. If your child is curious to try see how the bionic arms works, meet our Bionic Squad!