11-year-old Kye Vincent, a quadruple amputee from Leighton Buzzard, UK, was the first person in the world to receive an advanced 3D printed prosthetic arm with an official Star Wars R2-D2 design.

Kye contracted Meningococcal Septicaemia C when he was 8 years old. Doctors managed to save his life but he then caught an infection and they had to amputate both of Kye’s lower legs, his right hand, and part of his left hand. Kye immediately wanted to become a bionic boy, so the family started crowdfunding for a Hero Arm.

Kye’s mum, Cheryl Vincent, said: “Three years ago, Kye had Meningococcal Septicaemia – meningitis. It had spread in less than 24 hours, so they didn’t have much of a chance of saving his limbs. Kye said he wanted to be a bionic boy, so we started fundraising.” Seeing Kye with a hand again was very, very emotional. I was full of pride, I could burst. I was so happy for him. From a very young age, he’s always loved Star Wars. And to have it on a 3D printed prosthetic arm, it shows what he’s into.”

Watch video of Kye getting his Star Wars Hero Arm

Joel Gibbard, co-founder and CEO of Open Bionics said: “We’re really grateful to Lucasfilm for allowing us to find inspiration from their incredible Star Wars characters which has helped us to empower children with limb differences. The R2-D2 covers for the Hero Arm are easy to take on and off, allowing children like Kye to accessorise their bionic arm to match their mood. The covers showcase that your uniqueness is your superpower and you shouldn’t feel like you have to hide your limb difference – instead you can show it off.” 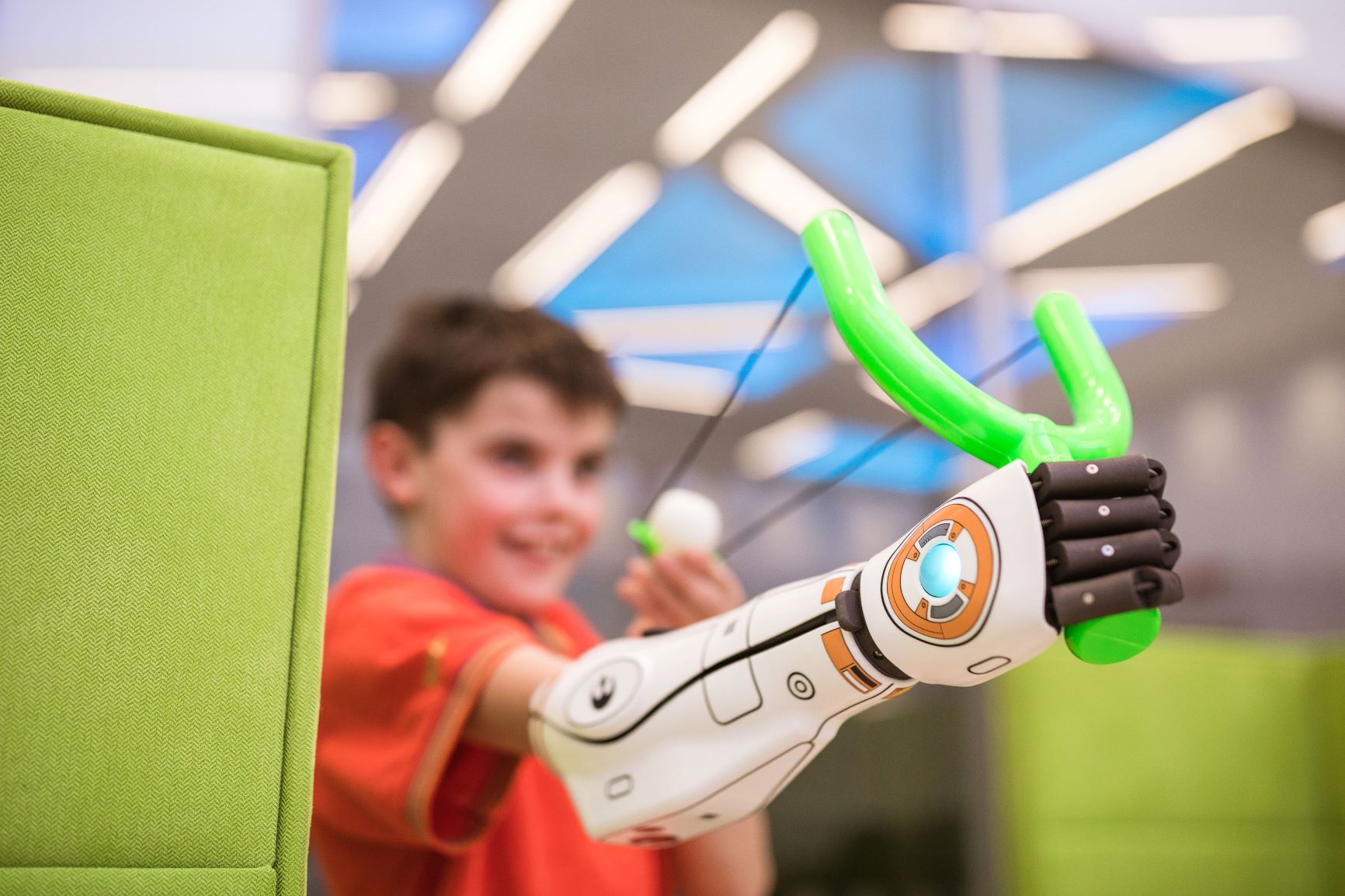 Our myoelectric Hero Arm can be used by children from as young as eight-years old. To find out if your child could be eligible, register their information and we’ll be in touch to share more information about the Hero Arm.

Register For A Hero Arm
We use cookies on our website to give you the most relevant experience by remembering your preferences and repeat visits. By clicking “Accept All”, you consent to the use of ALL the cookies. However, you may visit "Cookie Settings" to provide a controlled consent.
Accept AllReject AllSettings
Manage consent

This website uses cookies to improve your experience while you navigate through the website. Out of these, the cookies that are categorized as necessary are stored on your browser as they are essential for the working of basic functionalities of the website. We also use third-party cookies that help us analyze and understand how you use this website. These cookies will be stored in your browser only with your consent. You also have the option to opt-out of these cookies. But opting out of some of these cookies may affect your browsing experience.
Necessary Always Enabled

Performance cookies are used to understand and analyze the key performance indexes of the website which helps in delivering a better user experience for the visitors.

Analytical cookies are used to understand how visitors interact with the website. These cookies help provide information on metrics the number of visitors, bounce rate, traffic source, etc.

Advertisement cookies are used to provide visitors with relevant ads and marketing campaigns. These cookies track visitors across websites and collect information to provide customized ads.

Other uncategorized cookies are those that are being analyzed and have not been classified into a category as yet.